Mediaeval cats from Part I on feline domination created quite a stir. While I am labouring away at cat history of the 19th century, here’s more of symbolic medieval imagery. It is always bizarre, often funny, sometimes psychedelic, and, at times, mildly disturbing. And each one is a challenge on symbolism.

The Dark Middle Ages were not as somber as the name implies. Monks, sublimating their celibacy by prayer, brewing beer, and copying books would occasionally allow themselves a bit of fun in the margins. It appears they were using a lot of visual codes that no one can decipher now. Their symbolism has been forever lost with the invention of the printing press.

Are you ready for a bit of guesswork, and a lot of leaps of faith?

What is the symbolic meaning of this cat?

My take is that it must be a cat from the hallucinogenic meadows of Scotland. Perhaps, the French have always been friends with the Scots (and enemies of the English) because they believed the Scots might let them walk freely on those meadows one day. The flora here seems to be very different to the classical concept of the English Lawn. Any other ideas?

Next comes, or rather flies in, a penis monster with a Mona Lisa smile on its face. Apparently it takes its passenger non-stop to Sinful Pleasure, and Eternal Damnation. What it means, I suppose, is that all women think of is sex, and because of this they are a constant threat to men (at least, in the eyes of the celibate scribe in 1340).

Decretum Gratiani with the commentary of Bartolomeo a Brescia, Italy 1340-1345.

This particular visual symbol has survived the Renaissance, Reformation, Industrialisation, and postmodernism to become a standard feature of an urban public toilet, commonly known as “flying penis graffiti”.  Alas, its original moral message has been lost along the way.

If a flying willy is something we are all accustomed to, a cultivated pecker would be more readily associated with, say, a polite son of a bitch often encountered among corporate executives and lawyers than with a penis fruit tree.

What is the symbolic meaning of nuns harvesting penises from trees?

While this concept may seem silly and bawdy to a modern observer, it was quite popular in the Dark Middle Ages. It could be found on lead pilgrimage badges, wood carvings, and even frescoes, like the one discovered in Tuscany fifteen years ago:

If you can’t see the faded fruit on this mural, click on it to get a bigger size

At a recent conference on mediaeval manuscripts, a UK librarian came up with an unorthodox idea. According to him, the nuns represent an antithesis to the widespread secular attitude of indifference, which in most European languages is commonly reduced to “I don’t give a f***”. Effectively, the nuns say, “We give a lot of what you don’t”, or, simply, “We care!”

Rumour has it the librarian was sued by Office Depot for slogan copyright infringement, and later abandoned the idea in favour of the straightforward traditional view.  Depending on circumstance, the image could mean fertility, [re]generation, or men’s obsession with their potency, which feminist historians have established as the cause of the rise of chivalry, the popularity of jousts, and the beginning of most military campaigns, in general.

That’s not true, of course. Most boys, when they are innocent kids, love sword fighting and arrow shooting because, simply, it is tremendous fun. The problem is that some youths start entertaining the idea they can get even more fun with lethal weapons, once they don’t have to face their parents about torn clothes, broken limbs, and new holes in their bodies.

A lot of symbolism related to fighting and waging wars can be found in mediaeval books. Yet, some of it is not easy and sometimes impossible to understand.

In books, knights often fight snails. No one knows why. The prevalent hypothesis is that the snail stands for human vices, and feminine dissoluteness. I am sorry, but it seems to be about the bad influence of women’s thinking about sex all the time, again!

If you are in time management, think of using this illumination for your presentations: you can claim that the pioneers of your profession were noble knights in shining armor (tip: buy appropriate cufflinks, and a ring).

There is another recurring war-related image that fills out the margins of many mediaeval books. It is so… mediaevil that even hardcore mediaevalists don’t know what it really means. It is about bunnies maiming and killing men with amazing ingenuity and determination.

British Library, Royal MS 10 E IV, detail of f. 61v. The Decretals of Gregory IX [the Smithfield Decretals], edited by Raymund of Penyafort (or Peñafort); with the glossa ordinaria of Bernard of Parma in the margin. c.1300-1340

A giant rabid rabbit is a creature both to behold and run away from, isn’t it?

British Library, Royal MS 10 E IV, detail of f. 61v. The Decretals of Gregory IX [the Smithfield Decretals], edited by Raymund of Penyafort (or Peñafort); with the glossa ordinaria of Bernard of Parma in the margin. c.1300-1340

So, what this image is trying to tell us? Is it about dangers lurking behind amiable appearances of apparently harmless stuff? Is it a hint a fluffy bunny may become a murderous werehare? It could be a nice educational material to teach kids that the real world can be surprisingly cruel. The side-effect, of course, is that the number of dedicated hare killers and general-purpose psychos is expected to grow.

Now that you’ve been harassed enough by the mediaevil stuff, I’ll set off to finish Part II of my feline art history. In the meantime, you may want to entertain yourself by trying to guess the meaning of this highly symbolic image: 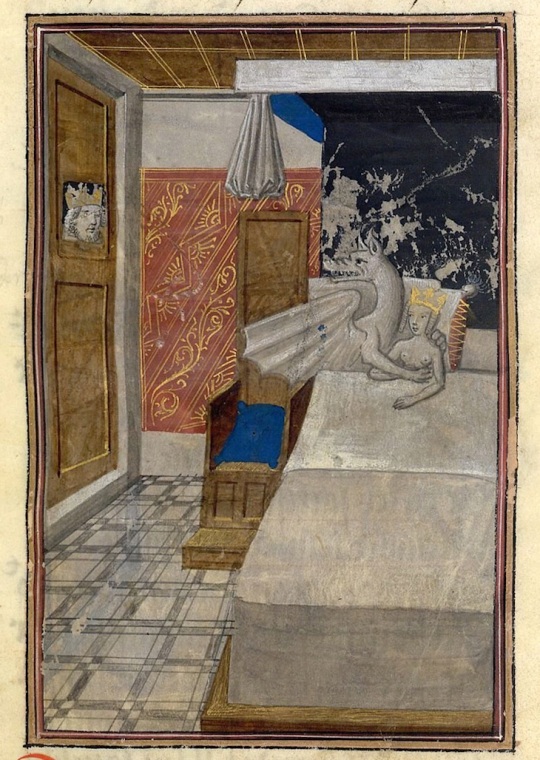 We are quite used to dragons being slain by saintly knights, but it doesn’t look like “a lady-in-distress” kind of story. Do you feel pity for the king? Or do you sympathise with the queen?

What the heck is going on here?

FP’ed three times. Something good must be inside!